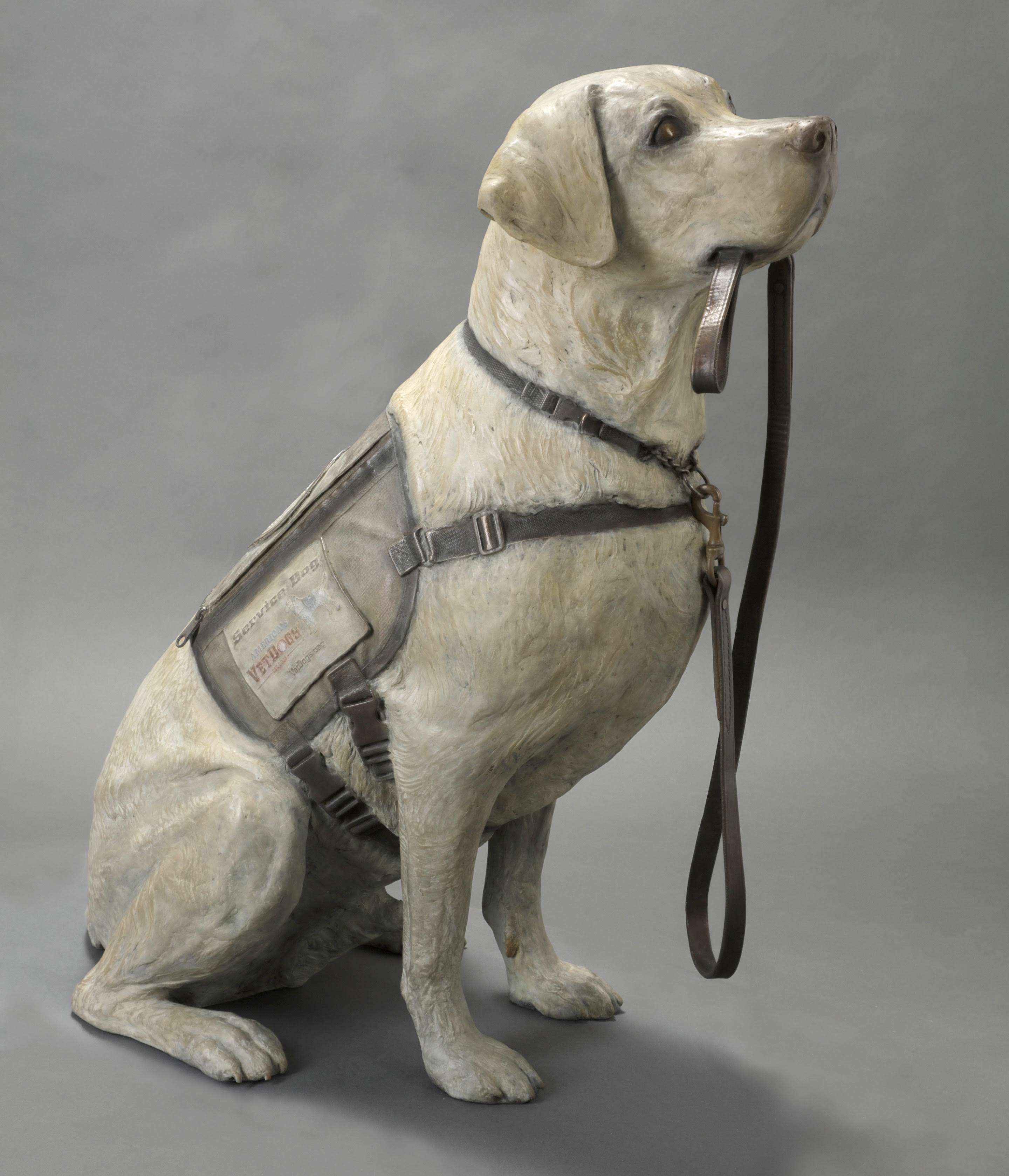 Statue Will Stand Proudly at the George H.W. Bush Library and Museum

The life-size Sully bronze will feature Sully in a sit positon holding his leash in his mouth, which depicts the ‘retrieve’ task that America’s VetDogs trains its service dogs to perform for their handlers. Both Bahary and VetDogs sought to highlight Sully’s work as a highly trained service dog while also showcasing his devotion and joy in serving the president. The piece will also include Sully wearing his official America’s VetDogs service dog vest that features the Great Seal of the United States on the back.

“I fell in love with Sully and wanted to capture in life-size bronze the beautiful loyalty and bond that our beloved president inspired in him and that was forever seared in our memories,” says sculptor Susan Bahary. “As a sculptor known worldwide for my service animal monuments, I feel Sully helps honor the president’s legacy, wonderful groups like America’s VetDogs, and raises awareness of all types of service animals, as I’m also doing through the National Service Animals Monument and the Purple Poppy movement.”

Susan Bahary is an internationally acclaimed artist based in California. Her noted sculptures include our country’s first official war dog monument, Always Faithful, commemorating the 25 dogs who died in the taking of Guam during World War II, which was unveiled at the Pentagon. Since then she has been a leader in creating some of the most celebrated service animal monuments to the animal–human bond, which are located in prominent museums, universities, and military bases in the U.S. and abroad.  Her most recent piece, Stubby Salutes, is a life-size bronze of the Boston Terrier mix widely recognized as one of the earliest and most famous American military working dogs, and celebrates Sgt. Stubby, who served in France in World War I.

In June 2018, service dog Sully, a 3-year-old, yellow Labrador Retriever, was specifically matched to provide support and companionship to the president in his daily activities. As of February 2019, Sully joined Walter Reed National Military Medical Center’s Facility Dog Program in Bethesda, Maryland, per the president’s wish, to continue his mission to help active service duty members, veterans and hospital patients through animal assisted therapies. Following his “Welcome Aboard Ceremony,” Sully was given the rank of Hospital Corpsman Second Class (HM2) in honor of President George H.W. Bush’s service in the U.S. Navy.

“Sully is an outstanding ambassador for the life-changing work our specially-trained dogs provide to our nation’s veterans and first responders with disabilities,” says John Miller, president & CEO, America’s VetDogs, “We are thrilled to work with Susan on creating this statue to immortalize the work and loyalty Sully had for the president. It was our honor to provide President Bush with Sully, and we are forever thankful for his service to our country and to those with disabilities.”

America’s VetDogs service dogs can be trained to do dozens of tasks, which include retrieving items as small as a credit card to an object as large as a dropped support cane, opening and closing doors, waking their handler from a nightmare, getting help or pushing an emergency button, bracing and supporting their handler when standing or walking up and down stairs, and many more.

It costs over $50,000 to breed, raise, train, and place one assistance dog; however, all of VetDogs’ services are provided at no charge to the individual.  Funding comes from the generosity of individuals, corporations, foundations, businesses, and service and fraternal clubs. To learn more you can visit www.VetDogs.org.

**Images and B-roll available upon request**

About America’s VetDogs
Since 2003, America’s VetDogs (www.VetDogs.org) has trained and placed guide and service dogs to provide independence, enhanced mobility, and companionship to veterans with disabilities from all eras. In 2015, VetDogs opened its programs to first responders, including fire, police, and emergency medical personnel.  America’s VetDogs is a 501(c)(3) not-for-profit organization founded by the Guide Dog Foundation and serves clients from across the United States. VetDogs relies on contributions from generous individuals, corporations, service clubs, and foundations to fund its mission to help those who have served our country live with dignity and independence. It costs over $50,000 to breed, raise, train, and place one assistance dog, but America’s VetDogs provides its services completely free of charge to the individual. America’s VetDogs has been accredited by both the International Guide Dog Federation and Assistance Dogs International.

Susan Bahary is a renowned sculptor dedicated to honoring Military War Dogs, K9s, and all service animals and their handlers through her work. In 1994, she created our country’s first official war dog monument, Always Faithful, commemorating the 25 dogs who died in the taking of Guam during World War II, which was unveiled at the Pentagon. Celebrating the service of human’s best friend, her monuments are located in prominent museums, universities, and military bases in the U.S. and abroad. Prior to Sully, her most recent piece is Sgt. Stubby, a life-size bronze of the Boston terrier mix who served in France during World War I and is widely recognized as the U.S. Army’s first Service Dog. She lives in California.

The mission of the George Bush Presidential Library and Museum is to preserve and make available the records and artifacts of George H.W. Bush, 41st President of the United States. We promote civic literacy and increased historical understanding of our national experience and foster a community of public service and volunteerism. For more information visit Bush41.org