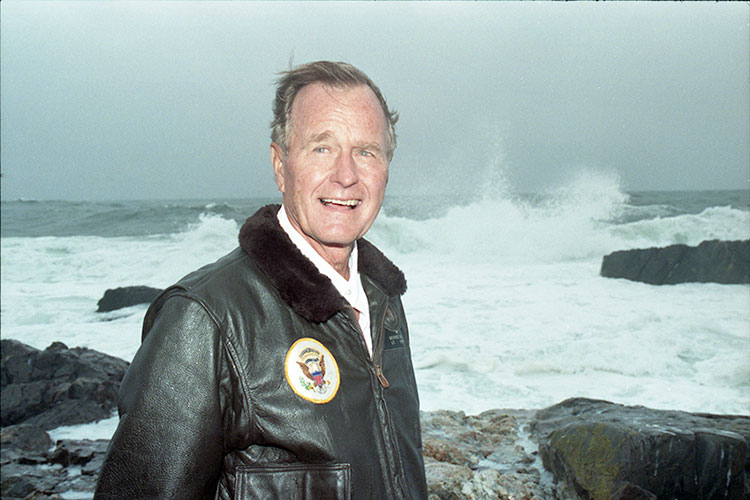 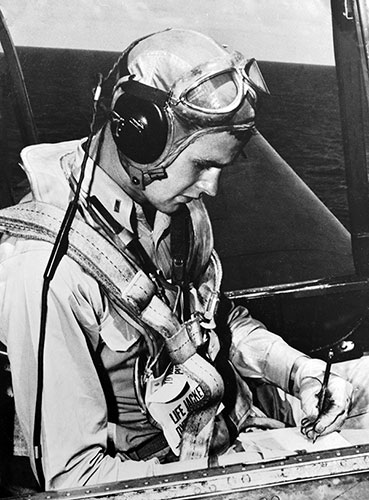 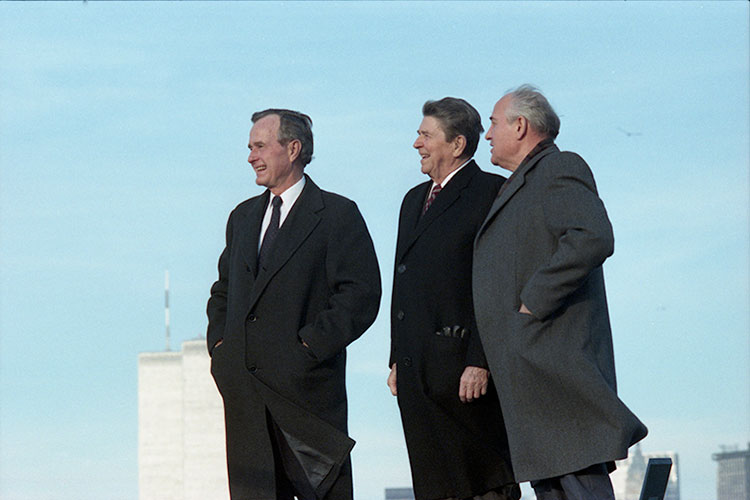 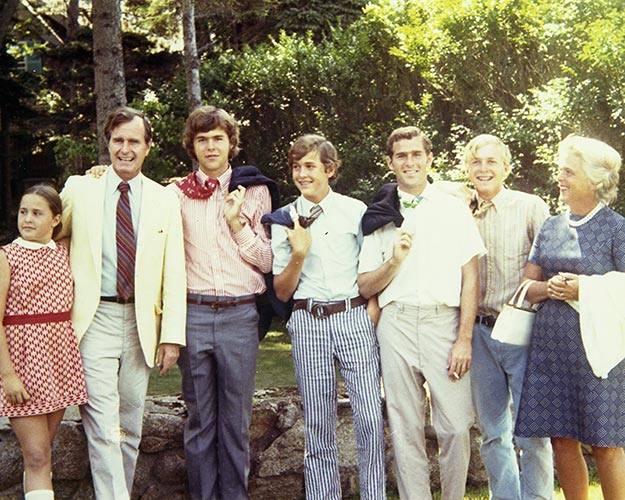 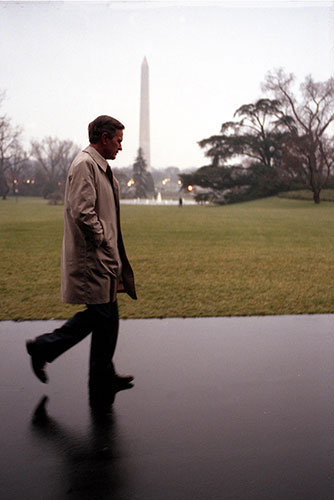 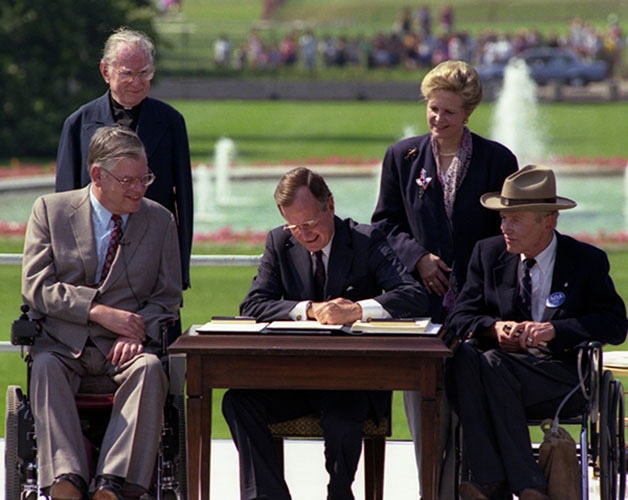 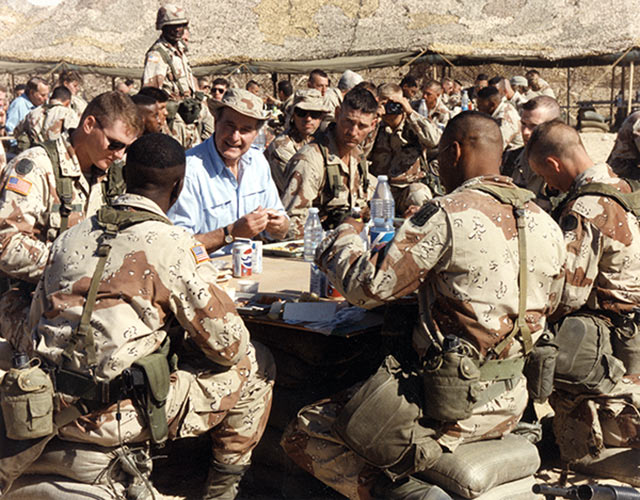 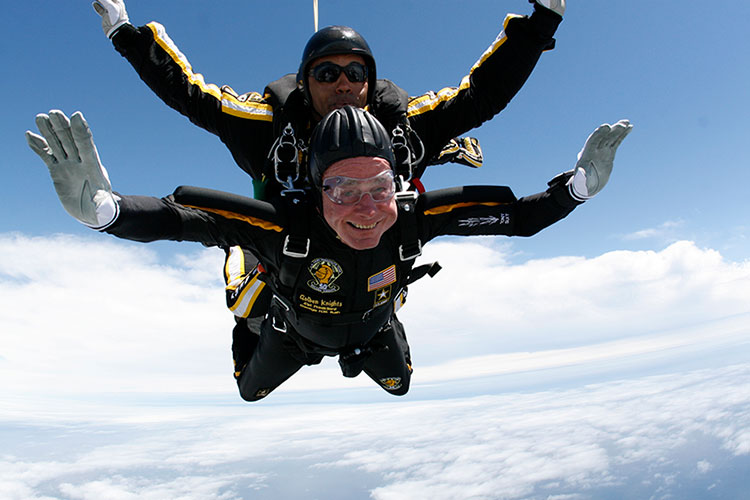 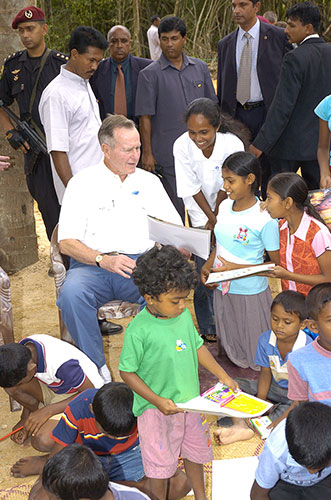 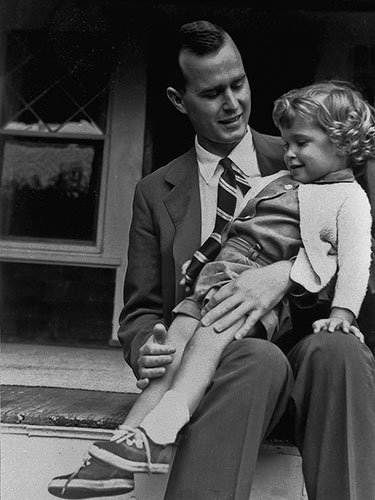 Sworn in as the 41st President of the United States on January 20, 1989, George Herbert Walker Bush helped usher in a new and more hopeful geopolitical era marked by the spread of freedom and free markets. During his historic term in office, the West prevailed in the Cold War; the Soviet Union gave way to a democratic Russia; the Berlin Wall “fell” and Germany was unified within NATO; and President Bush signed two treaties to drastically reduce the threat of nuclear war. After Iraq’s unprovoked invasion of Kuwait in 1990, Mr. Bush forged an unprecedented coalition of disparate nations to uphold international law. His deft handling of this international crisis enabled him to convene the Madrid Peace Conference later in 1991. Throughout his presidency, George Bush worked closely with his international counterparts, including Soviet leader Mikhail Gorbachev, in ways that advanced America’s interests in peace and economic opportunity. 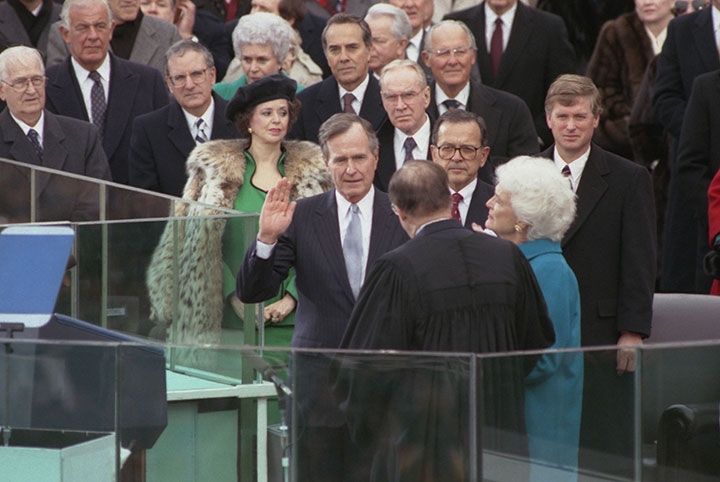 "To Make Kinder the Face of the Nation"

President Bush was the first sitting vice president to ascend to the presidency since 1837, and he was also only the second American president to serve a full term without party control in either chamber of Congress. Nevertheless, President Bush worked with Congress to pass the Americans with Disabilities Act and the Clean Air Act — landmark civil rights and environmental legislation. He also successfully fought for and negotiated the North American Free Trade Agreement (NAFTA), which was later signed into law. The education summit   Mr. Bush hosted in 1989 with all 50 U.S. governors at the University of Virginia helped to spur a national reform movement. The 1990 budget agreement he signed codified into law real caps on discretionary spending by Congress while cutting the deficit by historic levels.

As president, Mr. Bush launched his “Points of Light” initiative to promote volunteerism and community service across America, and during his term in office he named 1,020 Daily Points of Light hailing from all 50 states. Long before he entered the political arena, however, he demonstrated his belief that “there could be no definition of a successful life that does not include service to others.” While at Yale, for example, he helped lead an annual charity fund drive that benefited the United Negro College Fund  . In 1953, he helped establish the YMCA in Midland  , Texas and served as chairman of the founding board. The Bushes also started the Bright Star Foundation to support cancer research following the death of their three year-old daughter, Robin, from leukemia on October 12, 1953. 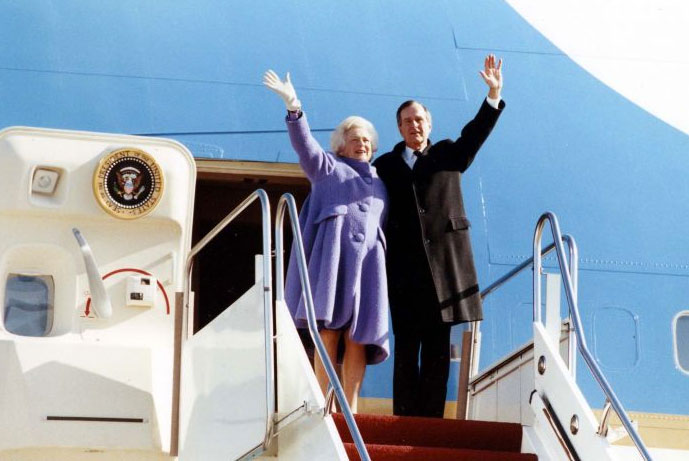 President George H. W. Bush has written two books – Looking Forward and A World Transformed – while his personal diary and other writings served as the basis for two additional books, All the Best and The China Diary of George H. W. Bush. 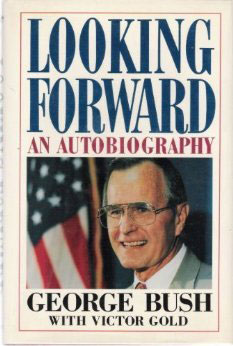 Co-authored with General Brent Scowcroft, on foreign policy during his administration 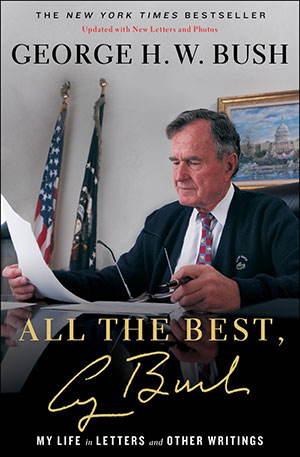 A collection of letters written throughout his life 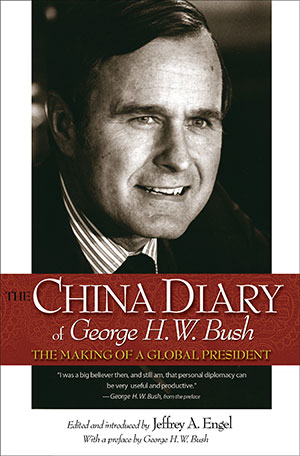 The China Diary of George H.W. Bush — The Making of a Global President.

In 2008, President Bush's diary, written during his time in China, was published under the title, 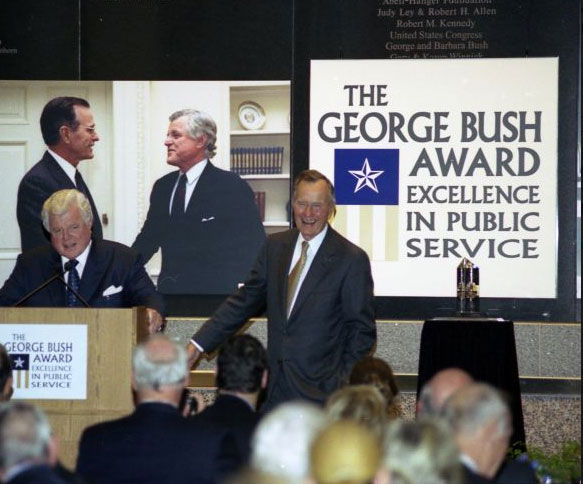 Since leaving office, President Bush has helped to raise hundreds of millions of dollars for charity. He served as chairman of the University of Texas’ M. D. Anderson Cancer Center Board of Visitors from 2001 to 2003, and the National Constitution Center in Philadelphia from 2006 to 2008. He was also named honorary chairman of the Points of Light Institute, the World Golf Foundation’s “First Tee” program, and C-Change, a coalition of cancer organizations. Of special note was his partnership   with his successor, President Bill Clinton, to spearhead public awareness and financial relief efforts for victims of the 2004 Indian Ocean Tsunami  , Hurricanes Katrina   and Rita in 2005, and Hurricane Ike   in 2008. In 2005, President Bush accepted an appointment from United Nations Secretary-General Kofi Annan as Special Envoy   for the South Asian Earthquake Disaster following a devastating earthquake in Pakistan that claimed nearly 75,000 lives. He also teamed up with former Presidents Jimmy Carter, Bill Clinton, George W. Bush and Barack Obama to launch the One America Appeal   for relief funds after the 2017 hurricane season devastated large swaths of Texas, Florida, Puerto Rico and the U.S. Virgin Islands 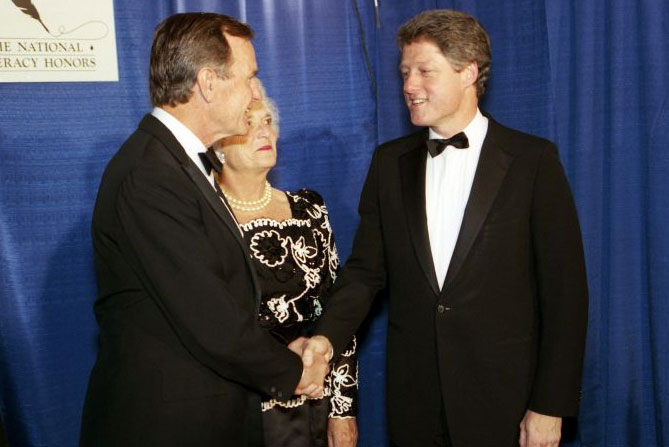 At the request of President George W. Bush, President Bush worked with President Bill Clinton to help raise funds to aid in the relief efforts following the catastrophic tsunami in Southeast Asia and Hurricane Katrina in the Gulf Coast states. 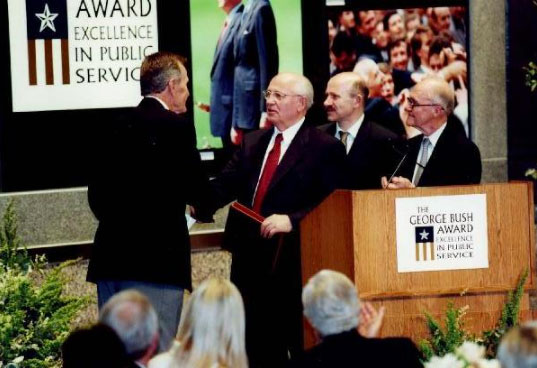 In 2006, he served as U.N. Secretary-General Kofi Annan's Special Envoy for the South Asia earthquake. 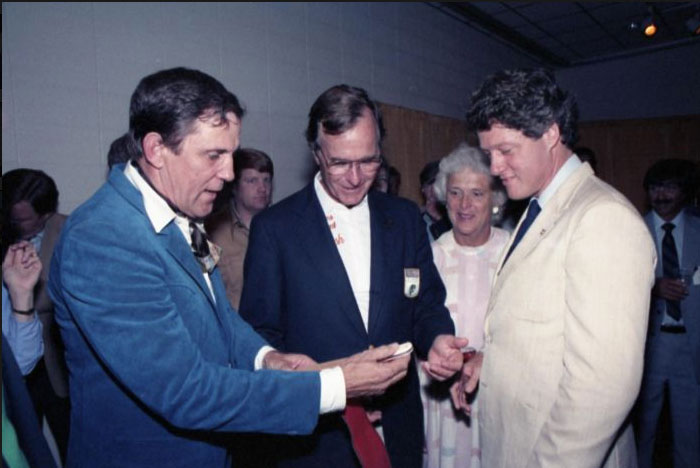 Following the destruction caused by Hurricane Ike on the Gulf Coast in September of 2008, President Bush again joined with President Clinton to form the Bush-Clinton Gulf Coast Recovery Fund to aid in the reconstruction of Gulf Coast infrastructure. 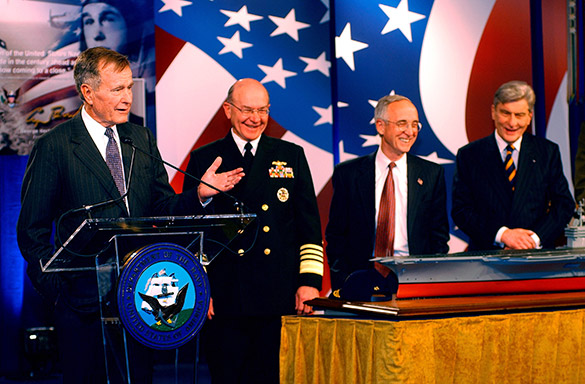 President Bush has received numerous honorary degrees and, after leaving the presidency, was awarded high honors from such nations as Kuwait, the United Kingdom, the Federal Republic of Germany, Nicaragua, Poland, the Czech Republic and Saudi Arabia. The Central Intelligence Agency headquarters in northern Virginia, Intercontinental Airport in Houston, and several elementary and high schools in Texas were named for the former president. The USS George H. W. Bush  , which is the tenth and last of the Navy’s Nimitz-class supercarriers, was commissioned on January 10, 2009 at Norfolk Naval Station in Virginia and has deployed around the world in support of America’s foreign policy objectives. Finally, on February 15, 2011, President Bush accepted the Presidential Medal of Freedom from President Barack Obama during a White House ceremony  .

Born on June 12, 1924, in Milton, Mass., George Bush became a decorated naval pilot who flew torpedo bombers during World War II. He was shot down on September 2, 1944 while completing a mission over Chi Chi Jima Island and, tragically, lost his two crewmen William “Ted” White and John Delaney. By the time he was honorably discharged in September of 1945, Lieutenant Junior Grade Bush had logged 1,228 hours of flight time, 126 carrier landings and 58 combat missions. He was awarded the Distinguished Flying Cross, and the U.S. Navy Air Medal with two gold stars. Mr. Bush graduated Phi Beta Kappa from Yale University in 1948 with a degree in economics, and immediately moved to Texas with his wife Barbara and eldest son George W. to begin making his way in the oil business. 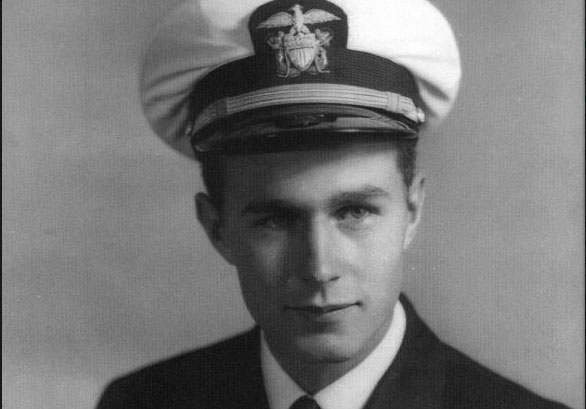 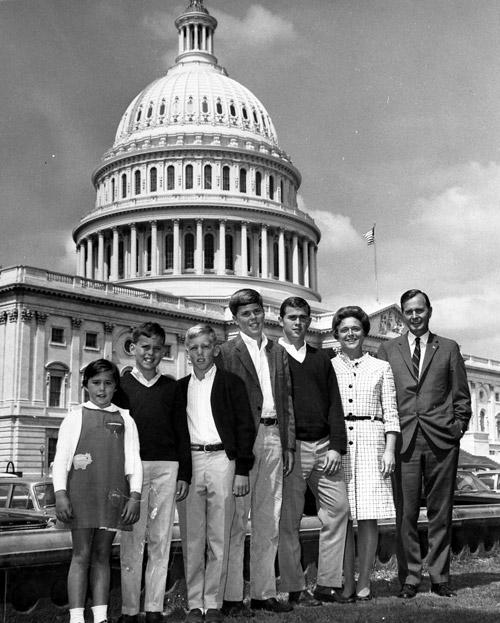 President Bush's career in politics and public service began in February of 1963, when he was elected chairman of the Harris County (Texas) Republican Party. He was elected in 1966 to the U.S. House of Representatives from Texas' Seventh District and served two terms. Before serving as vice president from 1981 to 1989 under Ronald Reagan, President Bush held a number of senior-level positions: Ambassador to the United Nations (1971-1973); Chairman of the Republican National Committee (1973-1974); Chief of the U.S. Liaison Office in China (1974-1976); and Director of Central Intelligence (1976-1977).

In 1980, Mr. Bush lost his first bid for the Republican presidential nomination to former California Governor Ronald Reagan, but accepted a spot on the GOP national ticket and served as the 43rd Vice President of the United States from 1981 to 1989. In that position, Mr. Bush managed federal deregulation and anti-drug efforts, and headed the Reagan administrations’ effort to combat terrorism. In foreign policy, President Reagan dispatched Vice President Bush at a pivotal and contentious time to help manage negotiations with key NATO allies leading to the deployment of Pershing II missiles in West Germany – a critical turning point in the Cold War. Flying from Texas to Washington, DC following the assassination attempt on President Reagan on March 30, 1981, Vice President Bush rejected a suggestion that he chopper directly from Andrews Air Force Base to the White House. “Only the president lands on the South Lawn,” he said, concerned about the worrisome impact such an irregular sight might have. 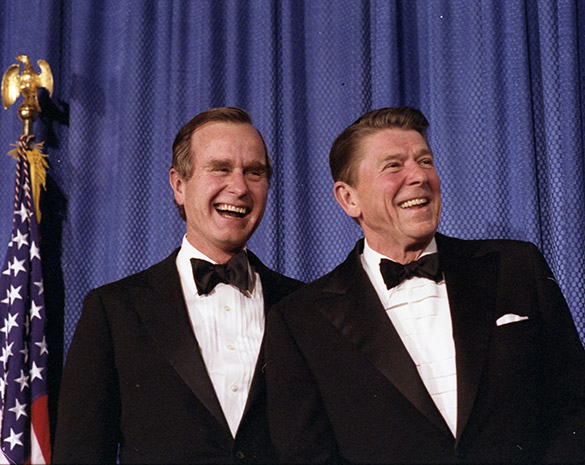 George and Barbara Bush have five children, 17 grandchildren, and seven great-grandchildren. Their oldest son, George W., was sworn in as the 43rd President of the United States in 2001 and served two terms, returning to Texas in January 2009. Their son Jeb served as the 43rd Governor of Florida from 1999 to 2007. The Bushes have been married since January 6, 1945, and reside in Houston, Texas, and Kennebunkport, Maine. President Bush takes great pride that all of his children and grandchildren are active in their communities helping others.