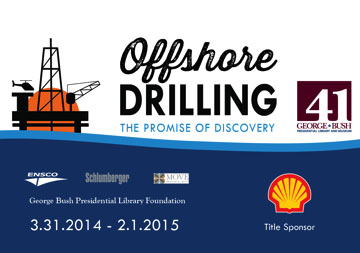 Offshore Drilling: The Promise of Discovery

George Bush was a successful and pioneering Texas oilman, first on land and then offshore in the Gulf of Mexico. As a tribute to his role in the development and use of the innovative independent leg offshore jack-up rig Scorpion launched by LeTourneau in 1956, the exhibit tells the story of offshore drilling. It focuses on the history, development and future of offshore drilling, with an emphasis on the work of George Bush, emerging technologies and ongoing research at Texas A&M University.

With Shell as title sponsor and supporting sponsorships from Ensco, Schlumberger and Move Resource Group, the exhibit covers all aspects of the search for oil offshore, with a special look at the geology of finding oil, focusing on exploration of the Gulf of Mexico. Industry pioneers recount their personal experiences. Visitors will be taken from start to finish — developing the "play" to platform production — via an interactive display.

A video wall highlights careers and life on board a rig. See models of the various rigs, platforms and supply vessels that are used in the industry, and pieces of drilling equipment. Additional exhibits feature Smart Gulf and Scientific Research from Texas A&M University.

Expertise for the exhibit has been provided by our partnerships with The Ocean Star Offshore Drilling Rig Museum; Texas A&M University through the College of Geosciences, Petroleum Engineering, Integrated Ocean Drilling Program, Department of Oceanography, Offshore Technology Research and Texas Sea Grant; LeTourneau University and PennWell.